Me and my bf had left our long-time kinship a couple months ago. For a time I felt free, and I really enjoyed not having to answer to or for anything or anyone.

We had a really nice all-Finnish raiding group going, and for once it was great to start events at an early hour (like, 6-7pm our time, as opposed to 9-10 in international guilds). Even though I read and write English well enough, it's just so much easier to raid in my native language than trying to squeeze out English in a tight situation. And the jokes, ohhh the jokes. However with the last Open Beta of Aion, and finally the launch itself, the group pretty much dissolved.

But I'm a social(ite) creature when it comes to internet communities, so it didn't take long before I started missing being part of a bigger group again. Last week me and my bf finally joined a kinship again, and it's been great so far. I'm actually enjoying playing through some of the old content again; the stuff I'd been utterly bored with is actually fun and interesting again, especially doing it with new people. And downing the last raid bosses with a competent team is also a great bonus :D.

I've got a ton of screens and more stories waiting, so stay tuned~!
By xhii klo 12:04 No comments: Linkbacks

So, I managed to get in Aion's Open Beta last week. Most of the blogosphere must be pretty bored by Aion rants already, but since it's the most exciting thing* that's happened in my life recently, I guess I should write something about it.

* shows just how exciting my life has been lately

I like the game, but won't be buying it (I had a preorder, which I cancelled). LotRO is pretty stagnant at the moment, and most of my raiding unit are about to switch over to Aion, so of course I was curious about the game. Also the artistic RP community is something I've really missed - LotRO just doesn't have anything like that. I'd certainly welcome something new, and exploring a new game felt really exciting.

Except it wasn't, because when I logged in and spent an evening grinding myself to level 10, it just felt like the free-to-play Korean MMOs I used to play in high school (meaning you stand still using 1-3 skills over and over until a mob topples over, and then you move on to the next one). Even though Aion has an extensive questing framework, the actual leveling still consisted of killing x amounts of y. Which is all right as long as the quest framework makes it interesting and gives it some kinda twist, but the Elyos side staring area was just awfully dull. Okay, so here's a sparkly lake. Here's a magical forest. Aaaand... the Asmodean side had the very same things! The sparklies kinda lose their effect when they're force-fed down your throat everywhere you look.

It's only a model.

Once I got my wings, visited the capital city of my side and started to explore the 'real world', it started to get interesting. I giggled out loud when I found a Fashion NPC whose shop had these on the walls:

Base patterns, which I had to learn to draw from day one at Fashion Design. Also, WTFnapoleon? :D

These guys look kinda cool. I wanted to try and fly to them, but was met with a glass wall. Bleh.

However my biggest disappointment with Aion were the graphics. Everywhere it's said that Aion is the most graphically advanced MMO at the moment, and it certainly has its merits, but the quality isn't very obvious, at least not in the starting areas (which you'd expect to look stunning!). Monster and armour design is really cool, but what bothers me more than necessary is the horrible texture quality! I play with a big screen, so low-res textures look really bad (I remember when I got this 24" to replace my old 19", and was shocked how awful Guild Wars looked). Except for some really nice shine effects on armour, Aion seems closer to WAR than LotRO or AoC, at least judging by the outdoor areas. I guess it must look incredibly stunning to WoW players.

The textures don't scale at all according to distance - the mountains in the back look all right, but the same texture is stretched out there on my character's right.

Here's the "shroom" from the previous picture. 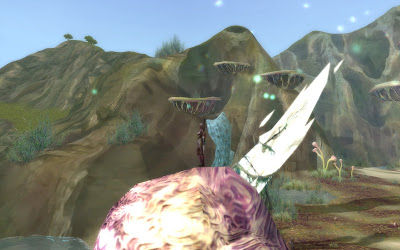 I'd still like to play Aion, but it feels like the kind of repetitive and time-consuming game that I really, really shouldn't pick up at this moment in my life (still aiming to graduate next spring..). Plus, LotRO has a new expansion coming, and me and my bf have just applied to a really cool kinship... let's see what the future brings :).
By xhii klo 13:10 1 comment: Linkbacks

Waiting in line for a daily quest. Poor endangered drakes.

A significant portion of my LotRO screens seem to revolve around outfits - what I'd like to call MMO fashion, because in a virtual world with thousands of near-identical player characters it's always so important to stand apart. I love mixing&matching different pieces to create unique outfits, hunting down rare skins and, of course, /inspecting everyone else's outfits.

From here on, I'm just going to shamelessly slap my best recent outfit screenshots under the title of Fashion Mag. Yay for vanity!!

I recently re-created my main's pre-Moria outfit - for once it looks unique.

PROTIP: the light in Grand Stairs is simply gorgeous! Makes for really good-looking closeups, as well as action shots!
By xhii klo 00:00 No comments: Linkbacks

Lately, as I've sometimes done the last ~weeks before new content updates, I've spent in the Ettenmoors, doing, zomg, PEE VEE PEE. If you've ever had the joy of sitting next to me while I'm getting ganked and are forced to listen to me whine and utter curses when the it's always just me screwing up... well, yeah, me and disappointments don't go too well together ("but I waaaaaaaa~nt him dead, waaaaan~nt"). But Monsterplay in LOTRO is fun, because I get to be this big pretty orc who throws fiery arrows at those disgusting princes on their white horses.

Meet my beautiful Blackarrow: Villemon, my endless source of amusement. He's purple. With manboobs and great hair. Playing Monsterplay (which our tribe calls affectionately 'perseily') is really therapeutic. What's more fun than seeing someone you really dislike on the other side and then light their ass on fire? Why, of course, seeing a friend there and doing him the same!

I also feel that there are more funny personalities behind monster faces than heroes. Whereas freep raids tend to be rather dry, the humour on creepside is often much more, uhm, down-to-earth, and I've often almost rolled off my chair /giggling late in the night. Besides, it's just so much more rewarding to play creepside, knowing that you're always the underdog and one of them would easily be match for 4 of us. When you do get them down, it just feels so good.

I've been a couple times to the Moors with my Lore-master again to finish Rank 4, but it's not nearly as fun as with my dear Blackarrow. The LM is easily the most hated class on the Moors, because everything they do is designed to be as annoying as possible. Luckily my computer lags so horribly when playing freepside that I'm not often tempted to join. Creeping is so much better.
By xhii klo 17:47 No comments: Linkbacks